Switzerland in the Holy Land

“Something is missing here, we are missing! Something has to be done!” – this was Father Gottfried’s first thought on a visit to the Basilica of the Annunciation in Nazareth during a pilgrimage to the Holy Land.

Over the course of many years the Basilica has been decorated bit by bit with new works of art from catholic countries where there’s a sanctuary dedicated to the Virgin Mary. Mainly in mosaic form, they’ve been given to the church from the worldwide community of more than fifty countries. However, there was nothing from Switzerland, where one of the biggest and most renowned sanctuaries dedicated to Mary in central Europe is located: the Sanctuary of the Black Madonna of Einsiedeln, in the canton of Schwyz. It’s a well known place, an oasis of peaceful contemplation in natural Swiss surroundings. The area also boasts a tourist industry, mainly skiing and trekking, as well as the famous Christmas market that attracts visitors from all over Europe.

Father Gottfried Egger is the Franciscan Custos of the Holy Land for Switzerland and Liechtenstein; being already familiar with our work, he commissioned to our laboratory the creation of an artwork that would bring Swiss devotion to the Holy Land, in that sacred place in Nazareth.

F. Gottfried, my business partner and I, met at the sanctuary of Einsiedeln, which we already
knew, and visited the inside. In Central Switzerland, the bitter chill of winter made itself even more present.

We exchanged a few words with the Benedictine monks who inhabit the monastery, and then we took refuge in a bistro in the square in front, for a steaming and comforting hot drink together with a chat about the forthcoming project.

A few things were apparent from the start: that it would be a coloured mosaic, representing the Black Madonna and Child and the front face of the sanctuary; it would include the written dedication in the four languages of the confederation and the sign and inscription of the caretakers of the Holy Land; it would measure the same 70 by 200 centimetres as the other works in the church in Nazareth; finally, it would be ready for the inauguration ceremony the following year, during one of the pilgrimages undertaken by the Swiss community. The contractor had a clear idea as to what was required, but they left us with free choice regarding colours, methods and materials.

We set to work immediately on the sketches. Once we’d selected the best one we quickly realised that it was going to be a substantial task involving much painstaking detail, with tiles cut by hand that in some cases would measure a millimetre or less. The first part that took our attention was the clothes for the mother and child: the original statue has more than twenty six dresses available, all hand-woven by skillful craftsmen who over the course of centuries have donated their work to the sanctuary. The clothes are changed by the monks on the basis of the liturgical calendar, and they come in many varied colours: reds, greens, whites, pinks, beiges, blues and so on, made of such fine materials as silk and brocade, all hand-embroidered and woven in the finest detail. I was given the freedom to choose the one that I felt would be most appropriate, and among many fabulous red dresses with golden embroidery I opted for one made in the Tirol in the eighteenth century.

We received great help from the monk who was tasked with the statue’s care, Gerold Zenoni; he dressed the Madonna and child with the clothes I’d chosen and also helped us during the photography sessions that are so necessary for a work of this nature.

Consulting with the Venetian company Orsoni, we chose the shades of red that best highlighted the exclusivity of the fabric. Once we’d chosen twelve shades of real gold, as well as the colours for sky, nature, the sanctuary and the inscription, we ordered everything and it all arrived on time in our studio at the end of July 2014.

The opening of the packages containing my mosaic materials always gives me the same feeling: Christmas! The faces of Mary and Jesus were quite a challenge, a few square centimetres prepared separately on a temporary cement base, for subsequent transfer to the main work. Moreover, although I was already used to working with light shades of flesh colours this was my first time working with their dark counterparts; the statue is called “The Black Madonna” specifically because the facial features of Mary and the baby Jesus are black, and I’d have to make them the same colour in my version.

It took all of three months for the clothes and jewels alone, followed by still more time for the inscriptions, the clouds, the sanctuary itself and finally the sky. We spent 900 hours in total on the work, leaving us exhausted but satisfied. Most importantly, we were finished within the agreed time frame.

We took the finished work to the Einsiedeln sanctuary, and on Palm Sunday, with the church jam-packed with the faithful and the curious, Abbott Urs Federer blessed it prior to its departure for Israel two weeks later. It remained on view for all of Holy Week and Easter Week following. During that time I received a great many messages of congratulations from the faithful, as well as the monks and friends who were visiting. 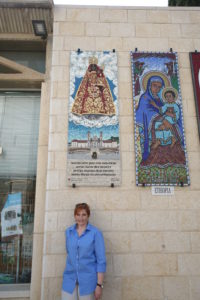 We entrusted the packaging and delivery to a company that specialises in the handling of great works of art, Fine Art Transports Natural Le Coultre SA of Geneva, who accepted the task of getting our work to Nazareth without a scratch and on time.

The contractor? Father Gottfried was overjoyed – he’s told me many times since that we fully satisfied his desire for a beautiful, colourful, resplendent work of art. “It’s exactly what I had in mind!” he told us upon seeing the completed project for the first time.

The critical moment had arrived: 24th April 2015 saw the inauguration with participation and speeches from Doctor Andreas Baum, the Swiss Ambassador to Tel Aviv, his assistant Mister Dominic Simon Jenny, the committee member P. Gottfried Egger ofm, the presence of the pilgrims, the Franciscan monks and ourselves. The morning was warm and bright, the mosaic was displayed to the east and sparkled in the powerful light of the sun, almost blinding me. The Swiss pilgrims were very happy to now be “represented” themselves in the Holy Land.

The Ambassador spoke glowingly about our work:

Dear authorities, dear pilgrim community, dear compatriots, it is a great pleasure for me to celebrate with you today the inauguration of this spiritual Swiss artwork in the Basilica of the Annunciation. Here in the heart of the Holy Land and as a representative of Switzerland, I would like to devote these few words of mine towards diversity and reconciliation. In the beautiful, artful mosaic of Switzerland, which we inaugurate today, the Madonna and the Christ are represented after the presentation of the Black Madonna in Einsiedeln, the most important Swiss icon of Mary. 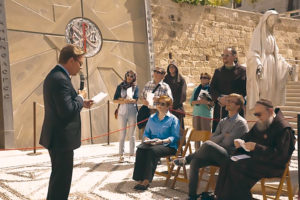 I would like to thank all those who have contributed to this, especially the artist who is with us here, because it was high time for this contribution. Now when I look around me and think of the 44 different artworks, all representing the same and yet all so different; but are nevertheless understood as a welcome diversity, as an enrichment to the whole – as individual stones of the great mosaic of this church; then this fills me with hope. The hope that the overall mosaic of this basilica procures as a model will become reality even in the Middle East tormented by conflict.

Other perspectives and points of view, other types of speech and cultural differences are no longer interpreted as a threat, but as an advantage. I am pleased with the diversity – by the way, a typical Swiss value that the Swiss Embassy is particularly keen to protect in this country – by which Switzerland’s most important place of pilgrimage is now represented here in Nazareth.

Historically, the Einsiedeln Monastery was always a significant gathering place, a place of reconciliation in which the German-speaking Swiss, the French-speaking Swiss and the people from Ticino would all feel welcome: a place of reunion.

May this mosaic also bring some of this spirit from Einsiedeln to Nazareth and into the entire region. Even in Switzerland, there were times when diversity – different language groups, different denominations, different concepts of state and society – was not regarded as a gift. But it is precisely of great importance in such times; that the people rise and aspire to binding values.

Precisely like Niklaus von Flüe, the patron saint of the Swiss Confederation who did not shy away from calling for peace in the fifteenth century, in view of the escalating conflicts in the old Confederation. “Peace is always in God, for God is peace” and therefore the Swiss Cantons should live in peace with themselves and their neighbours.

A vision that should not appear utopian, even in this region and at this time. The hope for peace for the people of the Middle East, a region which is in the headlines so often solely for their conflicts, their suffering and the persecution of people because of their religion or ethnicity – the abominations of Syria are not far from here – this hope should never be exchanged for resignation and arranging with the status quo.

Our presence today, at this beautiful gift of mosaic, is a strong expression of our hope for the power of reconciliation. I would like to thank you once again for the friendly invitation and I wish you all the best on your way through the Holy Land.

After two years we still receive warm words of praise from people who visit the Basilica of the Annunciation. It makes us very proud, and inspires us to continually put everything we can into out work. 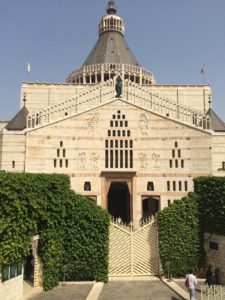