Covering Irregular Surfaces Is a Headache: How to Make It Go Away 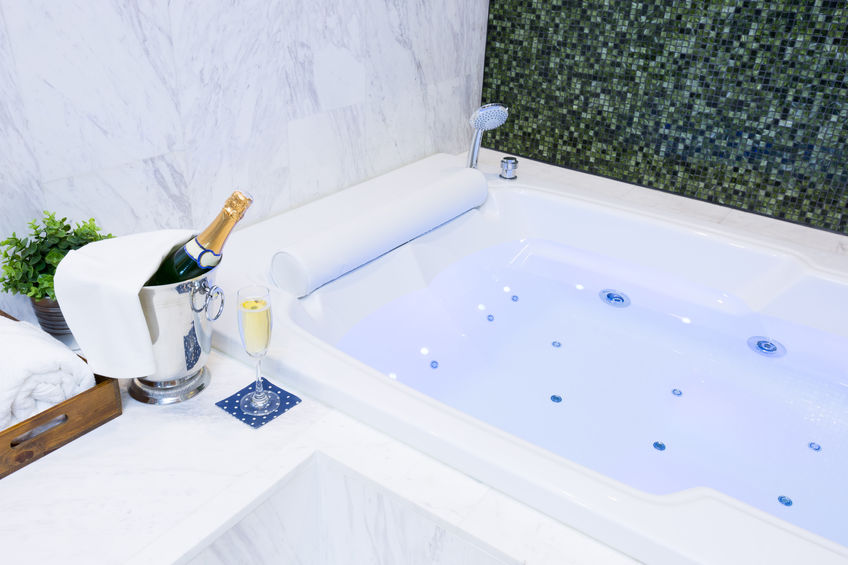 Lately we have been called by an architect with a somewhat unusual request by one of his clients.

While discussing the renovation of his villa – a luxurious building with some retro flavour, on the shore of a lake – the client pulled out a catalogue of whirlpool tubs, with a wide choice of models, such as we are now used to see in most specialised shops.

The architect told us that the master bath in the villa is itself some kind of a monument to luxury: as big as your average drawing room, sporting four windows on three sides, it looks upon the garden of the villa, and the lake just beyond.

The owner wants to install one of the tubs in the catalogue, embedded in the floor; since the bath is at the ground floor, and the foundations are directly beneath, it would be easy to dig a bit and support the thing.

So far, so good. But then the owner had produced some pictures from somewhere, showing wide bathtubs decorated with geometric motives in black-and-gold mosaic. Could the architect make something like that with the whirlpool?

You could read the young professional’s bafflement in his eyes. Making a bathtub in concrete, like the one in the pictures, and then coating it with mosaic, was all very well; but how about taking an industrial item, a plastic tub made to be as smooth as possible so that everything runs away, and sticking some mosaic on it? That is an entirely different kettle of fish.

Can we help him make his client happy, give him his tub the way he wants it? Is it possible at all to mount a mosaic inside a tub that is all made of folds and slits, with jets of water everywhere, and make the mosaic stick without problems?

Let us say straight away that we have indeed found a solution, although it was not what the architect or the owner expected. However, it turned out to be a convincing solution: so much so, that the client is now making his mind to entrust us with the actual execution of the project.

A whole set of problems

Coating the inside of a shower, which is flat enough and mounted on a concrete basement, is easy enough. There are a few arrangements to be made (to name one: giving the floor the correct slope towards the water drain), but no great worry. 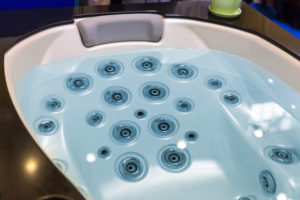 We tackled the latter problem first, and tried working out some solutions.

Usually when we need to adhere a mosaic to a smooth, waterproof surface, we use what is called an “arriccio”, which consists of making the surface rough and ready to hold the mortar, which in our case is usually a concrete-based mortar with special additives to improve its adhesion and elasticity, still staying environment-friendly.

To perform the arriccio we use specific glues, depending on the surface; and while the glue is still fresh, we pour some rough inert material on the surface: for instance, large-grained sand, or very thin gravel, or something alike.

In this case, we should plan for an appropriate arriccio of the surface, before even thinking of installing the mosaic. However, the tub the client likes is made of very smooth, very stick-proof materials, just like any other product of the same kind.

So the question was still open: where should we install the mosaic?

The egg of Columbus

We managed to work out a solution, which was made possible by some positive circumstance; namely, that the client is on one side strongly motivated to achieve what he wants, and on the other, he has the budget he needs for this end. Privacy requirements do not allow us to provide any clue that might identify the person; let it be enough to say that money has never been an issue in this project.

We arranged together with the architect that we would not work on the original tub, but rather on a reproduction made in fiberglass.

The architect identified a company specialising in this kind of processing; we met the person in charge of the works, and agreed with him on the technical details. Therefore, our task is now covering the artefact with one of our mosaic.

How does one work on such an irregular surface?

Let us go back to the three requirements we set out above. The third is fulfilled; let us focus on the first: “surfaces that are noticeably irregular”.

The artefact in fiberglass does nothing more than reproduce, square inch by square inch, the original surface. Which is very irregular, as we already mentioned.

From our special point of view of mosaic makers, this is in fact a challenge: with its indentations and projections, slits and folds, the surface reminds the skin of some prehistoric animal.

We decided to tackle the challenge from two points of view:

Mosaic making has remained basically unchanged until the mid-19th century; in the latest 150 years it has been enriched with different variations.

In this project, we almost use all of them.

Parts of the tub – in particular the seats, where people sit or lie – can be easily done by the indirect method. We can use some appropriate technical means to make “sheets” of mosaic, which we shall then install as if they were parts of a puzzle.

Other parts need the direct method, the oldest: folds and slots do not allow for desktop simulation, so the work must needs be made by sticking the mosaic stones directly onto the fiberglass, keeping under control at the same time the direction of the coating and the decoration motives.

As we mentioned above, the work will have to be finished without rough points, to avoid the risk of scratching or wounding the user, or just making him or her uncomfortable with the feeling of something edgy on their skin.

Of course, mosaic cannot reproduce the feeling of total lack of edges, which one would get from the original plastic tub. We pointed this out to both architect and client.

However, by using the correct materials with skill, and finishing with the appropriate water-resistant grout, we are sure that the result will be pleasant to feel, and will guarantee years of satisfaction, both visual and functional. 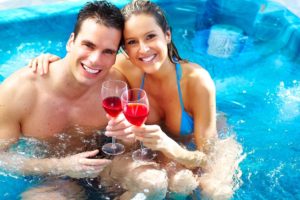